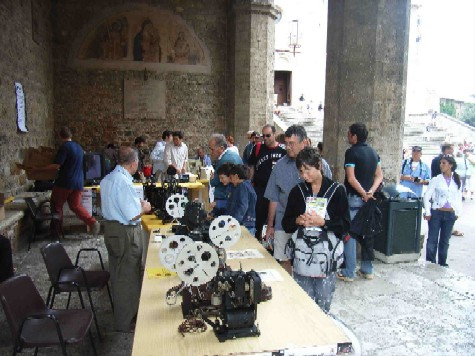 Since in Italy August is the time of vacation and the big cities are completely empty, every year we tend to change the HMD location and move from Bologna to other places (little town or villages in areas quite crowdy in the Summer), and everytime we organize the HMD with the strong collaboration and support of local partners. It works, for many reasons: the communication is by the usual media, but also word by word, the idea is to realize an event involving everyone. We would like to involve the people of all the ages. This approach could help also to develop local projects in rediscovering and collectiong the private film heritage in the future.

The 4th (our 3rd) edition took place in San Gimignano, a beautiful village near Siena. The location in the morning and in the afternoon was the Piazza del Duomo itself, the centre of the medieval city. It was easy that many people, not only inhabitants with films, but also tourists and curious stopped there to see and ask. Then we had the chance to explain to many people during all the day the importance of saving the old memories. Of course, people came also with their films. From San Gimignano countryside (Val d’Elsa) and elsewhere. And like usual there was the exhibition of old apparatus (cameras and projectors) by the collector Antonio Pignotti.

In the evening the screening took place at Teatro dei Liggeri (a restored theatre of XVIII century), instead of the plein air screening in Rocca di Montestaffoli (because the weather was getting worse). We selected around 15 films collected during the day. The audience was 150 people.

Anyway, the first screening was a film we took from Archivio Nazionale del Film di Famiglia:

“Nozze d’argento” by Giuseppe Lenzi. Shot in 1957 in Siena and San Gimignato. A visit of an old couple for the celebration of the 25th year of marriage (nozze d’argento), filmed in 8mm b/w by their son. With sound added, a poetic view of a special moment of the family life. Lenzi is one of the most interesting amateur filmmakers discovered by Associazione Home Movies in these years. His way of filming and editing is remarkable, the subjects are always family events and he is a poet of everyday life. Now his films are also documents of details completely disappeared.

After that, various screenings. Among them, a marriage filmed in 1953 in color 16mm. The husband was a partisan and the filmmaker a relative or a friend came back from America with a camera, as the old man says… Just to contextualize the evening, he is also the father of the mayor of the city (present at the screenings). Other images filmed by American tourists in 16mm in the 50s, they are not Yankees, but immigrants, just people from San Gimignano came back to their village many years after to see what happened in the while and what changed. Other immigrants: Tuscan people moved to South Africa in the 60s, their life in the Apartheid society filmed in 8mm. Then some classic stuff in 8mm and Super 8, a real fun for the audience (especially carnivals, a religious procession carrying the mummy of Santa Fia and children dressed in white, those now are old women).

At the end, special screenings of mysterious films: diaries of a family in a 16mm reel (in 20s and 30s), the new years day of 1942 in a house of a fascist man and an “adieu” with an amazing close-up soldier kissing a girl before leaving in 1941 (someone said “he seems a vampire”).

Paolo also sends this mp3 link to an interview conducted for an Italian radio program of the public Australian broadcaster SBS, featuring himself and Australia’s National Film and Sound Archive Director Paolo Cherchi Usai, explaining why home movies can be much more than a family treasure.