Since we were coming all this way we figured we should do more than
one event, and we really wanted to get the New Orleans filmmaking community involved. So the Friday night event was held at the
Zeitgeist Multi-Disciplinary Arts Center, a great place just outside of downtown. We termed the program “Personal films by local independent filmmakers” since we didn’t want to restrict them to showing their home movies (though some did). The program was curated by Helen Hill,
a New Orleans animator who had screened her flood damaged home movies at the recent Orphan Film Symposium. She has been displaced and living in Columbia, SC since Katrina so this was her first time back since she returned last October to save her things from her flooded
home. It was a great program and well attended. Highlights included Helen’s home movies and a video made from them by Courtney Egan, weaving Helen’s water-damaged, pre-Katrina footage with video shot from the same POV after the storm; George Ingmire’s incredible video assembled from recent transfers from his grandfather’s home movie collection—footage of his son, born with Down Syndrome, shot from infancy into teens, with a voiceover left behind by his grandfather; a video diary by a 10-year-old girl named Kalypso (available online here), and Zeigeist owner Rene Broussard’s raw video footage shot from the window of his car, radio turned up loud, of the plethora of advertising signs from the insurance companies, contractors, real estate companies, and sign makers, already in place to welcome back NO residents on the first day
authorized for their return.

On Saturday afternoon we headed to the French Quarter for HMD proper. The venue was the “Counting Room” of the Historic New Orleans
Collection, a gorgeous room in a structure originally built by a prosperous merchant and trader named Jean François Merieult in 1794-95. Attendance was modest and not all contributions were in condition to be projected—not because of any Katrina-related damage,
but because of more common types of deterioration. Two projector-ready collections included one man’s footage of his son’s jazz band playing at the 1984 New Orleans World’s Fair and Eisenhower’s visit to the city on the sesquicentennial of the Louisiana Purchase. We also had the opportunity to screen the many films that were submitted for the occasion by archives in New Orleans and around the nation. From the Academy Film Archive, a clip from the Newcomb Condee Home Movie Collection was screened, shot on a 1927 visit to New Orleans shortly after
the Great Mississippi Flood of that year. David Weiss of Northeast Historic Film generously donated to the Historic New Orleans Collection a reel of 1952 Mardi Gras Kodachrome footage. And the Historic NO Collection and Louisiana State Museum screened recent preservation work from their collections, including a gorgeous jazz funeral and footage of 1965’s Hurricane Betsy. Colorlab had also put us in touch with a woman from the Mississippi coast whose home movies had been partially destroyed during her house’s flooding. George Ingmire returned from the previous night with another reel from his
grandfather’s collection, showing silkworms at work—unfortunately in no condition to be rojected, to our collective disappointment. Helen Hill premiered a new Super8 home movie of her pre-verbal son demonstrating his skill with sign language. 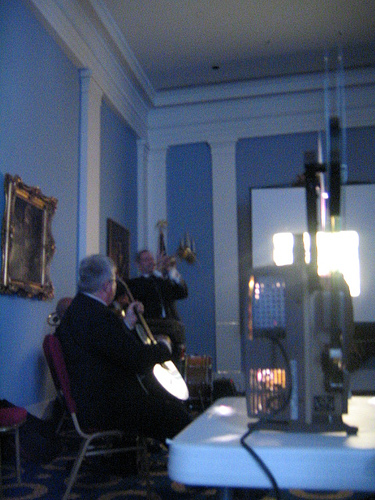 Through it all, the legendary London-born New Orleans jazz drummer/singer Barry Martyn and his combo accompanied the films, most often with music (“Stormy Weather” for hurricane footage!), but also by chiming in to identify old friends they spotted among the musicians on parade in the footage on screen.

The crowd size was a disappointment (and probably due to the difficulty of parking in the French Quarter, a problem which we knew about but decided to risk anyway), but there were many, many wonderful things beyond the few hours of the screening for those of us who made the trip. Being able to spend time with the local people and hearing their stories was very moving (especially having a breakfast picnic on the porch of Helen Hill’s destroyed house). Every single person we dealt with was unbelievably friendly and giving and they kept thanking us over and over for coming down. Ultimately I think the best result of the weekend for HMD was the contacts we made with the filmmakers and the archives. It feels very likely that they’ll continue with Home Movie Days in the future, and we’ll really get a handle on how much of the city’s home movie legacy is still in existence.

Many thanks due: John Lawrence and Stasia Wolfe of the Historic New Orleans Collection, Courtney Egan, Helen Hill, Rene Broussard, and the Louisiana State Museum.