Home Movie Days around the world, new collections, Home Grown Movies and our ever expanding community of amateur film advocates and supporters are all highlighted in our 2015 Annual Report.

2015 saw the Center for Home Movies (CHM) hit the little screen in a big way, with a featured slot on CBS’s Sunday Morning show. Our featured project for the year was the Home Movie Registry, an ambitious venture which was introduced to the archival world after several years in the making. Home Movie Day continued to grow in its 13th year, with events taking place in a record 21 countries around the world. We revived our preservation program, thanks to a grant from the National Film Preservation Foundation, which allowed us to preserve a home movie of the 1944 Republican Convention. We also saw a change in our Board of Directors, with two members stepping off, and a new one stepping up. 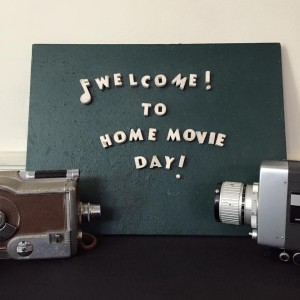 From San Francisco’s 2015 HMD at the Internet Archive

Our achievements are largely accomplished through the volunteer efforts of our active Board members and a community of supporters.  We operate on a frugal budget and CHM’s income is a mix of donations and stock footage sales, all of which goes back into the organization. Please consider supporting us – every little bit counts and your contributions are tax deductible.

A tip of the hat to Dwight Swanson for composing this year’s report. The executive board of the Center for Home Movies thanks all who donated money, time, talent and muscle over the past year. Without you our work in preserving and promoting home movies would not be possible.